As SAP continue to enrich the functionality of Integrated Business Planning (IBP), in this blog I am going to describe the outlier detection and correction methods offered within IBP for demand (as at release 1608). I will not however be discussing which of these methods are the best, as from my experience I have found that the rules and methods vary depending on the organization’s perspectives and processes followed.

Why Outlier Detection and Correction?

An outlier can be defined as “an observation that lies outside the overall pattern of a distribution” (Moore and McCabe 1999). In the context of IBP for demand, the outlier is related to the sales history of a particular time bucket that differs from the other data points with a defined level of statistical significance. Often, the planners will be unable to explain the reason or root cause for such exceptions, for example the underlying information to distinguish between base demand and one-off lift is unavailable.

The key presumption for outlier correction is that, whatever the cause of the exception, it is a one-off event that should not be used to predict the level of demand in the future.

With the huge number of planning combinations that planners are expected to process, manually identifying and correcting outliers is challenging, if not impossible! Unless outliers in historical data are detected and corrected, the quality of the forecast that is generated will be poorer – garbage in, garbage out.  So how does the functionality of IBP for demand help the planner to automatically identify and correct outliers?

In both SAP Advanced Planning and Optimisation (APO) and SAP Spare Parts Planning (SPP), the outlier correction cannot be run in isolation from forecast generation.  This is where IBP for demand differs as it provides the flexibility to run outlier correction as part of the statistical forecast like in APO, or in a single pre-processing step to allow the potential for a manual review/alert prior to the execution of the statistical forecast.

I will now describe the different methods currently provided by IBP for demand to detect whether a data point should be considered as an outlier for the processing by one of the correction algorithms I will present in a later section.

The variance test in IBP for demand evaluates the allowed upper and lower thresholds of the time series using the mean and standard deviation of the series. Any data point that either exceeds the upper threshold or falls below the lower threshold is detected as an outlier. The formulae for each are;

The multiplier – highlighted in red box in Figure 1 (like sigma factor in APO) is therefore the number of standard deviations either side of the mean to set the thresholds.

There are many blogs explaining the algorithm behinds IQR Test (also known as Box-and-Whisker Plot or Box Plot), but here’s my version:

Sort the data in ascending order and split the sorted series into two halves. (If an odd number of data points exist, ignore the median data point)

The IQR is then the difference between Q3 and Q1.

Any data point that exceeds the upper threshold or falls below the lower threshold is detected an Outlier.

I will now describe the methods available in IBP for demand to adjust those outliers identified in the detection step above. For reference, APO offers three methods of outlier correction; 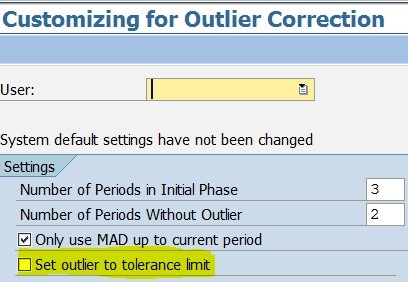 IBP for demand offers six different outlier correction methods to choose from (as in Figure 6):

In the figures below I show some results of the different detection and correction methods for a sample time series using historical periods parameter as 34 and multiplier as 1.

The same as APO, for data sets exhibiting high degree of seasonality or higher trend values, the IBP for demand outlier methods may not work that well. As far as outlier detection/correction is concerned, there are no hard and fast rules to be followed by any organization. Since IBP for demand doesn’t offer flexibility to implement customer specific algorithms, the customers are forced to pick one of the standard techniques. Although some customer specific computations might be achieved through key figure calculations, more complex algorithms would require the use of L-code which only SAP can define.

So are the standard methods available sufficient? Statisticians or data scientists are better placed to answer this question, but as a stepping stone, I would suggest trying the various methods and comparing against your existing outlier detection/correction methods.

In the recent 1611 What’s New webinar from SAP, no new outlier correction/detection methods have been introduced. Will the ex-post method be offered in future releases? Would the “Forecast engine extensibility” mentioned by SAP on the IBP for demand roadmap bring any extra enhancements? I’m also eagerly waiting to see!